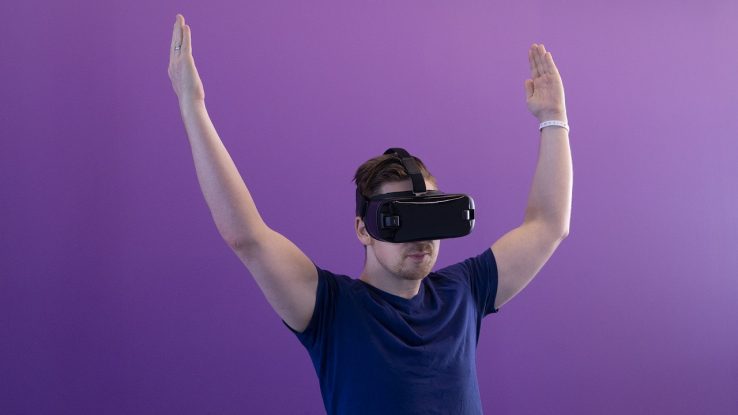 A few years ago the interest in the virtual reality was still large: The hype cycle, which accompanies VR already since the nineties, let people euphorically long for the publications of the first market-ready VR headsets. That was in 2016, when Oculus, HTC and Sony defined how consumer-friendly and immersive VR glasses with six degrees of freedom should look and function. 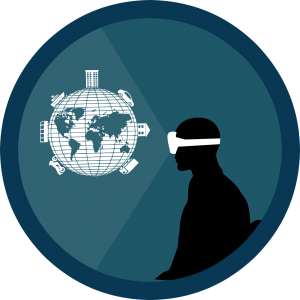 Oculus and Sony relied on outside-in-tracking, which was realized via connected cameras. HTC, which published Vive in cooperation with Valve, used SteamVR’s Lighthouse system, a marker-based inside-out tracking system.

The glasses search for both stations that emit a pulsed infrared laser. Based on the time difference of the incident rays on the sensors on the glasses, a position and orientation of the headset accurate to the millimetre is then calculated.

Since the end of last year, the company has been able to gain experience with its enterprise product HTC Focus, a makerless inside-out tracking system, which is now to be extended to the normal “consumer” business with Vive Cosmos. Among other things, the new tracking system is intended to increase convenience, as the absence of base stations reduces room preparation to a minimum. Just as Oculus VR has already shown the way with the Rift S and the Quest at the beginning of the year, so they want to create a more user-friendly experience with VR. On the other hand, HTC has a full 800 Euro price tag on the headset, automatically positioning it in the enthusiast segment. On the one hand, the Vive Cosmos has to do everything better that the Rift S can do for less. At the same time, the glasses must be able to offer enthusiast features like Valves Index to justify the price. 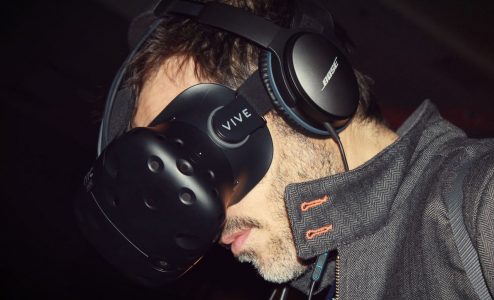 Compared to the predecessor Vive from 2016, a few things have changed in the appearance of the new glasses – the most striking is probably the Halo band. The Halo strap attaches to the head and distributes the weight of the glasses evenly over the skull, which represents an enormous ergonomic gain over the 2016 model. There, they were fixed with straps, which always resulted in ski mask impressions on the face or even pressure pain during longer sessions. The colour of the new headset has also changed, so that it now shimmers in a metallic blue, which is perhaps still familiar from the HTC Vive Pro. Similar to the updated model from 2018, the sound is now an integral part of the headset: Two extremely soft and movable ear cups on the halo band can be attached to your own hearing organs. The VR headset makes an elegant and high-quality impression, even if the product design with the open pattern on the visor may not suit everyone’s taste.

In terms of ergonomics and comfort, HTC has done quite a bit, but to be honest it couldn’t have been too difficult either, since in the 2016 model only straps held the glasses by pressure on the skull. Thanks to a rotating ring on the back of the head, you can adjust the halo strap to your own head diameter, a Velcro strap in the middle secures the headset additionally to the skull and allows the wearer to better fix the sweet spot of the VR glasses in front of his eyes. In addition, there are removable forehead and back of the head pads, which often give off a plastic rattle and crack when using the headset. The reason for this might be the modular design, because here some clamping noses hold the cushions in the glasses and generate noises when moving. Unfortunately, this bites itself off with the elegant and high-quality impression from the beginning, yes, it literally gives the glasses a cheap paint job. But the glasses also make other noises, because HTC has a small fan built into the front. This guarantees that the lenses don’t fog up and that the welding development in the face is limited. The fan is audible, but only as long as you don’t wear your glasses and don’t immerse yourself in the action. The last big comfort update is of course the markerless Inside-Out-Tracking, which is used by six cameras on the headset itself for position determination. This eliminates the need to prepare a play area and the need to set up annoying external sensors. 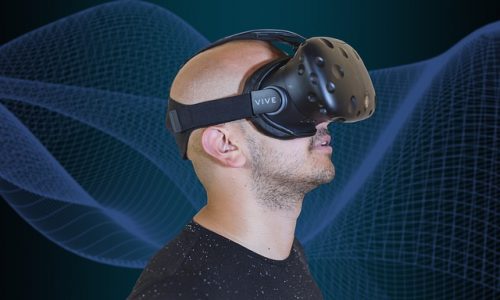 The new Vive Cosmos controllers are very similar in form factor to the Oculus touch controllers, only a bit chunkier and bigger. Without batteries a controller weighs 167 g, with the two necessary mignon cells it’s already 215 g.

This corresponds to an additional weight of 65.4 percent (57.6 percent without batteries) compared to the touch controllers of the Rift S. The additional weight is really noticeable and can lead to exhaustion after some time in motion-intensive games. Above all, the characteristic tracking ring is much more bulky than that of the competition from the USA and also has an illuminated pattern. This may remind you of a tribal tattoo from the 90s, but it is mainly responsible for the tracking and the orientation of the input devices, but it empties the batteries of the controller accordingly faster.

Two 3.4 inch LCD panels are used in the VR glasses, which have an update rate of 90 Hz and are equipped with an RGB subpixel matrix. This means that a resolution of 1,440 × 1,700 pixels can be output per eye, which is slightly more than with competing glasses: Valves Index, the Oculus Quest and the HTC Vive Pro can each display 1,440 × 1,600 pixels per eye, whereas the Rift S “only” displays 1,280 × 1,440 pixels. Due to the increased number of pixels, the screen door effect, which was a major criticism of the 2016 Vive, has almost completely disappeared: You have to make an enormous effort to see the technical effect. The higher resolution and the field of view of about 110°, which is slightly lower than Valves Index, result in a higher pixel density than the competition.

The output image is of course very sharp, so that you can read even small fonts without any problems. Even if no OLED displays were used, the LCDs create decent black levels that don’t need to hide. Dark or black areas don’t degenerate into a greyish compromise, so you won’t be deprived of immersion in dark scenes. With the Oculus Rift S, the IPD controller fell victim to the cost-cutting measures, but with the HTC Vive Cosmos it’s back again – with a price tag of 800 Euros, it would have been somewhat surprising if that hadn’t been the case. With this control you can set your interpupillary distance, i.e. the distance between your pupils, in a range from 61 to 73 mm. This makes horizontal and vertical lines sharper.

Vive Cosmos comes with a half-year subscription to Infinity on HTC’s Viveport platform. This is basically a storefront for VR titles, on which you can use a VR flat consisting of several hundred games for half a year. There is no real difference between other VR offers like Steam or Oculus. During the installation Lens and a VR console are added to the disk, so that the first time you start it it can get a bit confusing. This happens especially when you start titles from SteamVR, because then the responsibility of the programs is not completely clear and it can happen that you jump from SteamVR to Viveport, only to end up in SteamVR again. This makes HTC’s software suite a bit confusing and artificial. 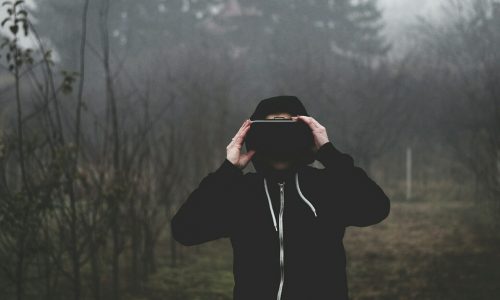 The analysis with the VR-FCAT-Tool shows that due to the increased number of pixels and the higher refresh rate of the display the GPU is more affected by the HTC Vive Cosmos than for example with an Oculus Rift S. Already with an RX 480 or GTX 1060 graphically simple titles like Beatsaber can be played without problems, but also more complex games like Hellblade can be enjoyed almost without problems in VR even at the highest quality level. On the whole the Vive Cosmos shows more runaways than the Rift S and usually takes a little longer for a frame. Nevertheless, it turns out that the VR glasses can be used well with an RX 480.

The successor of the HTC Vive is a complete technical improvement to its predecessor, just as it usually should be. A colourful and high-resolution LC display, in which the fly screen effect has been reduced to an imperceptible minimum, also allows the reading of small fonts and draws a clear, appealing picture without massive clusters of rays or glare. If the tracking was initially faulty, no real disadvantage could be detected in the test. In a direct comparison, only a slightly unclean movement could be registered, but on the whole the updates seem to be fruitful.

Technically speaking, the HTC Vive Cosmos is a really good VR headset, which does a lot right and is technically very well ahead. The real problem, however, is the price, which is pretty high at 800 Euros. The innovations alone don’t justify such a price tag, even though the ergonomic gain compared to the 2016 model is enormous and the higher resolution draws a sharp and appealing picture. For almost 200 Euro more you would get the complete system of the Valve Index – the premium VR goggles, which technically has even a bit more to offer. On the other hand: If you want to save 350 Euro and buy an Oculus Rift S, you basically get exactly the same. The sound is clearly worse with the cheaper competition and the resolution per eye is lower, but that was it basically. The Vive Cosmos therefore lacks the unique selling point or the reason why so much money should be spent on this headset.